Carnival of the Animals – Something for Everyone!

What’s your fancy in classical music?   Humorous, tongue-in-cheek parodies?  Lush orchestration?  Fabulous writing for piano?  Gorgeous cello melodies?  Music that appeals to musicians of all ages?   French composer Saint-Saens’s “Carnival of the Animals” has all these elements and more.  In fact, this wonderful piece has something for everyone!

Young students love to play simplified versions, virtuoso performers delight in giving creative presentations of the entire suite, beginning composers diligently study his use of timbre and color, and we’re all fascinated with this brilliant musical zoo!

This piece has inspired many generations of musicians and audiences, but  Saint-Saëns himself was not one of its biggest fans.  Soon after its premiere in 1886, Saint-Saëns removed it from public performance and only published one of the fourteen movements, “The Swan”, in his lifetime. He must have had a great deal of fun writing the Carnival, but was concerned that the music critics of his day might not consider “fun” as an important factor of classical music.  He wanted to be taken seriously as a composer, and so banned the performance of “Carnival of the Animals” until after his death.

Ironically, “Carnival” is one of his most popular and enduring works, and is now enjoyed by audiences and critics all over the world!   In many ways, it’s one of the favorite pieces that has ensured his place in musical history, even though he suppressed it for years.

How many animals are in the Carnival?

The Carnival consists of 14 movements.  The first 13 each depict an animal or group of animals, and the last movement is the Finale. 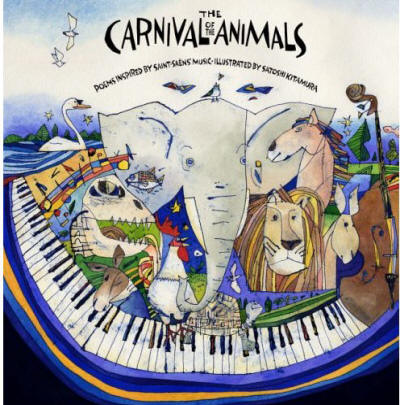 Saint-Saëns created musical portraits of Lions, Hens and Roosters, Wild Donkeys, Tortoises, The Elephant, Kangaroos, The Aquarium, Characters With Long Ears, The Cuckoo in the Depths of the Woods, Aviary, Pianists, Fossils, and The Swan.   Can you find all of his creatures in the above picture?

Orchestration of the Carnival – Then and Now

The piece was originally written for a rather small chamber group of flute, clarinet, two pianos, glass harmonica, xylophone, two violins, viola, cello and double bass.  Today it is usually performed with a full orchestra of strings, and with a glockenspiel substituting for the rare glass harmonica.

Composition students will notice the masterful orchestration:  Saint-Saëns uses only the instruments he needs for a particular musical portrait and picks exactly the right combinations to create the perfect sound for each movement.

Let’s listen to this music now!

In the late 1940s, Goddard Lieberman of Columbia Records and conductor Andre Kostelanetz had the inspired idea of adding poetry to Saint-Saëns’ score.  Ogden Nash was their first and only choice as poet.  A poet known for his unconventional rhymes and sense of humor, Nash was the perfect choice for the Carnival!
Here’s a great article that includes all of the Nash poems: Saint Saens’s Carnival of the Animals with Verses by Ogden Nash

Here’s the first of the Ogden Nash “Carnival” poems to serve as an introduction:

Camille Saint-Saëns
Was wracked with pains,
When people addressed him
As “Saint Sains”.
He held the human race to blame,
Because it could not pronounce his name,
So, he turned with metronome and fife,
To glorify other kinds of life,
Be quiet please – for here begins
His salute to feathers, fur and fins.

If you’d like to follow along with the score as you listen, the full score is available free for downloading and printing.  Click here to get the .pdf file of the full score:  Carnival of the Animals Full Score.

Younger students will enjoy coloring as they listen to the music!  Here is a great link to help the young listeners become more involved:  Carnival of the Animals Resources for Young Children

Let’s Listen to all the animals!

Now that we’ve learned a little of the history of the piece, let’s listen to all the animals in the wonderful carnival!

I. “Introduction and Royal March of the Lion” (strings and two pianos) Young piano students may become more excited about practicing their scales when they hear Saint-Saëns’s lion roaring up and down the keyboard!

II. “Hens and Roosters” (strings without double-bass, two pianos and clarinet) This is a humorously nervous movement, with jittery string figures that suggest chickens scratching and pecking at grain. In less than a minute, we have a complete picture of clucking hens and an occasional rooster crowing. Composition students enjoy this miniature for its use of string staccato, piano trills and the carefully placed contrast of a clarinet.

IV.  Tortoises (strings and piano).  If you’ve ever heard the famous can-can melody from Jacques Offenbach’s Orpheus in the Underworld, you’ll laugh out loud at this movement.  Students love the poem in this recording, and love to play this satirical movement as slow as possible.  A wonderful version of this piece for beginning pianists can be ordered here: Early Piano – Carnival of the Animals.

V.  The Elephant (double-bass and piano). Students delight in this movement for the lowest, heaviest-sounding instrument in the orchestra.  Here is another parody from Saint-Saëns. According to myth, sylphs dwelt in the air and were light, dainty, and airy beings.  This musical elephant takes his theme directly from Hector Berlioz’s “Dance of the Sylphs”, as he lumbers clumsily through a movement aptly marked as Allegro Pomposo.  A less likely “sylph” was never heard!

VI. The Kangaroos (two pianos). The main figure here is a pattern of “hopping” fifths preceded by grace notes. The phrases of this brief caricature are clipped and irregular, and we can almost see the mob of kangaroos!

See how they shiver, dart and gleam,
within their private ocean.
Or silently they drift and dream,
so graceful that they almost seem
a lullaby of motion.

The music of The Aquarium begins at 0:35.

For those who haven’t seen fish in a real aquarium, here is a lovely video:

VIII. Characters with Long Ears (two violins). In a direct contrast to the dreaminess of the Aquarium, the violins now shriek and bray. Composition students, note the many different possible “voices” of the violin.

IX. The cuckoo in the depths of the woods (two pianos and clarinet). The pianos play large, soft chords while the clarinet plays a single two-note ostinato, over and over; a C and an A flat, mimicking the call of a cuckoo bird. Composition students, notice how the repeated interval acts as a “pedal point” while the harmonies change.

X. Aviary (strings, piano and flute). This delightful movement flutters and flies! The acrobatic flute plays the part of the bird and the strings and pianos provide a wonderful background.

XI. Pianists (strings and two pianos). The earnest pianists practice their scales. The score includes the following instructions: “the pianists should imitate the hesitant style and awkwardness of a beginner”. In this performance, pianists Mihaela Ursuleasa and Richard Hyung-ki Joo do a masterful job at being “beginners” – missing notes, getting out of rhythm, becoming frustrated. All the other performs follow suit in this parody of an activity all musicians know very well!

XII. Fossils (strings, two pianos, clarinet and xylophone). Here, Saint-Saens mimics his own Danse Macabre which makes heavy use of the xylophone to evoke the image of skeletons playing card games, the bones clacking together to the beat. The musical themes from Danse Macabre are also quoted; the xylophone and the violin play much of the melody, alternating with the piano and clarinet. The piano part is especially difficult here – octaves that jump in quick thirds. Allusions to “Ah! vous dirai-je, maman”, the French nursery rhymes “Au clair de la lune” and “J’ai du bon tabac”, the popular anthem “Partant pour la Syrie” as well as the aria “Una voce poco fa” can also be heard. The musical joke in this movement is that the musical pieces quoted are the fossils of his time.

XIII. The Swan (two pianos and cello). This is by far the most famous movement of the suite. It is often performed solo, and is used to showcase the interpretive skills of the cellist. The lushly romantic cello solo, which evokes the swan elegantly gliding over the water, is played over rippling sixteenths in one piano and rolled chords in the other. This movement has been arranged for many different instruments and combinations and is a great favorite for budding performers and virtuosos alike. The great Mischa Maisky plays the cello on this performance. The music begins at 0:35.

For those who have not seen swans in real life, here is a wonderful video of two swans swimming in a lake:

XIV.  Finale – Everyone joins in the fun as we wind up this “orchestral zoo”!

Now we’ve reached the grand finale,
Animale carnivale.
Noises new to sea and land,
Issue from the skillful band.
All the strings contort their features,
Imitating crawly creatures.
All the brasses look like mumps
From blowing umpah, umpah, umps.
In outdoing Barnum and Bailey, and Ringling,
Saint-Saëns has done a miraculous thingling!