New Yorker staff writer Adam Gopnik, who has the career I wanted and is therefore a permanent barbed presence in my psyche, mounts a concerted defense of Sinatra. I own all the right Sinatra albums, but I’ve never entirely warmed to them. Acclimated to the hyper-virtuosity of Sarah Vaughan and Betty Carter and innately averse to orchestral arrangements, I find Sinatra exactly what Gopnik says he’s not: a slightly hammy product of a fifties culture that (at its worst) preferred showbiz convention to the risks and difficulties of real art. Vocally and musically, he was a modest talent. Of course he sings with personality but in an era dominated by preternatural virtuosi—at least some of whom more or less died for their art—this isn’t saying much. Gopnik presents his Sinatra penchant as charmingly contrarian, but in fact every critic makes a point of seeing past Sinatra’s commercialism (and even more Louis Armstrong’s commercialism). What’s genuinely contrarian is suggesting that Sinatra’s not after all that great, i.e., taking things at face value at the risk of seeming undiscerning. Here’s Gopnik:

The Pure Artistry of Frank Sinatra – By Adam Gopnik

Sinatra aside, I leap to the defense of the fifties at the slightest provocation. Having been reared on Baby Boomer propaganda like Pleasantville (1998) and Mad Men, my students ceaselessly disparage the fifties as an era of conformity, close-mindedness, and materialism. I retort that the fifties were a golden age of American arts and culture, whose leading lights—Leonard Bernstein, Ray Charles, Van Cliburn, John Coltrane, Miles Davis, Glenn Gould, Hitchcock, Jasper Johns, Nabokov, Mingus, Monk, Flannery O’Connor, Eugene O’Neil, Jackson Pollock, Ayn Rand, Norman Rockwell, Dr. Seuss, Muddy Waters, Billy Wilder, Tennessee Williams, Edmund Wilson—have no equivalent in later decades. I further remind them that the sixties did not even have the brains to invent themselves, but were invented in the pages of Allen Ginsberg and Jack Kerouac, circa 1956-1957. When you consider those who remained active (E.E. Cummings, Eliot, Faulkner, Frost, Hemingway, Henry Miller, Marianne Moore, Pound, William Carlos Williams) and those from elsewhere whose work was filtering into American culture (Bergman, Bresson, Camus, Fellini, Kurosawa, Picasso) the fifties become a crushing commentary on our own inadequacy. This is not even to mention doo-wop, which is as lovely and lonely and quintessentially American as any art form.

Exhibit A: Nabokov and Lionel Trilling here discuss Lolita on Canadian public television. Consider what this clip implies about the despised fifties: that a largish number of people not only gave a damn about a novel like Lolita (the third bestselling novel of 1958), but gave a damn what an academic Mandarin like Trilling had to say about it.

Exhibit B: Norman Rockwell’s (1962). This painting embodies the cultural strength of the fifties. The gentleman’s relaxed posture suggests confidence in his own premises. Susceptible to neither faddish enthusiasm nor Philistine hostility, the gentleman is capable of unruffled and impartial consideration of “the new.” His elegantly cut suit suggests that he is not without aesthetic refinement of his own. 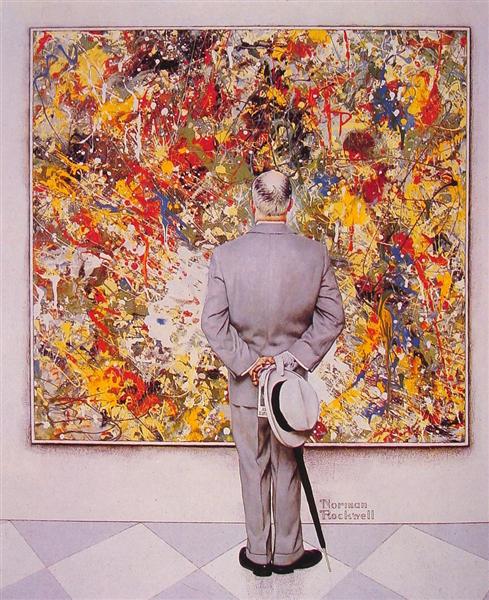