Messiaen’s Eight Preludes are wonderful studies in sound and color. These notes from Prof. Michal Bristiger are invaluable windows into studying the Preludes.

The Huit Préludes are among Messiaen’s early works. He was only twenty years old at the time the Preludes were written.  He had not yet undertaken to experiment with rhythm nor was he completely involved with bird singing yet. He was, however, familiar with the concept of tone-colour and he had already set up the harmonic “modes of limited transposition” which gave rise to his idea of individual coloration.

Messiaen underlined that, contrary to normal scales, his seven modes are not transposable 12 times but only a fixed number of times: the first mode is transposable only twice; the second, (called the octatonic scale or diminished scale) three times; the third, four times; and the fifth, the sixth and the seventh modes, six times.Under the principle of synaesthesia, Messiaen associates colours to his modes and combines the fifteen natural harmonics into one chord, “the resonance chord”, which he describes through a variety of colours. These chords, played in turned over manner, recall the effect of refracting light through a window glass in a cathedral, a phenomenon which Messiaen calls “rainbow effect”.
Yvonne Loriod, a great pianist and pupil of Messiaen who became his second wife, made an historical recording of the Préludes. In the booklet included, Messiaen himself defined his Préludes “studies in colour”. This explains how early Messiaen had in mind the relation between colours and tones. Each Prelude is based on one mode creating a particular atmosphere with a specific colour. At the end, Messiaen annotates that the colours in his work as a whole are basically violet, orange and purple.

1. La Colombe – “The Dove” is a binary sentence based on the second mode of limited transposition which evokes bright colours like orange veined with violet. This Prelude starts with a simple melody – on an obstinate accompaniment in E major – which moves through the augmented fourth melodic interval (the tritone). Messiaen appreciated this interval, which was not used in the past on account of its dissonant character and its complex intonation. He used this interval in all the Préludes and, generally, in all his works because he considered the augmented fourth the most important interval in the harmonics produced by the natural resonance of the sound. The parallel movements of the chords (at the beginning only on the right hand and at times on both hands) recall much of Debussy and Ravel’s harmonic technique, renewed, however, by Messiaen’s system of modes which he developed into a typical feature of his musical language. 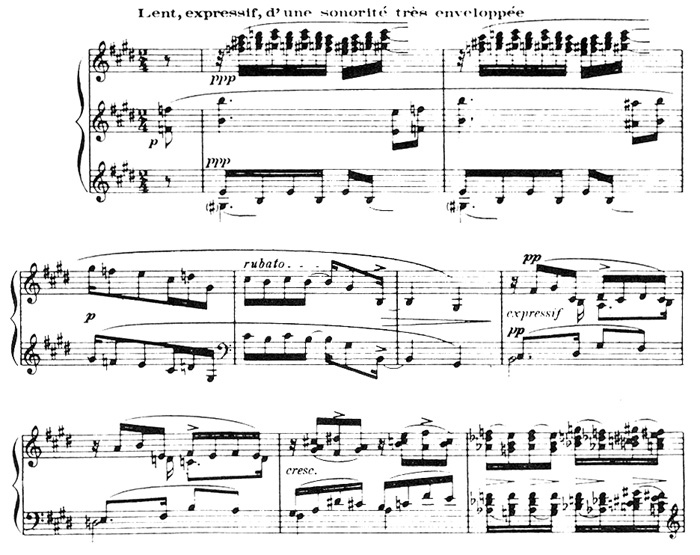 2. Chant d’extase dans un paysage triste – “Song of ecstasy in a sad Landscape” is a symmetrical rondo form based on the second mode of limited transposition (used in the first Prelude) which here, in its second transposition, evokes not an orange bright colour, but a dark grey, mauve, Prussian blue like the mysterious mood of a “sad landscape” should be. At the beginning and at the end of the piece, a simple melody on a melancholy obstinate introduces the static atmosphere. The middle part, instead, is a faster, brilliant section whose colour is again bright: diamond-like, silvery. 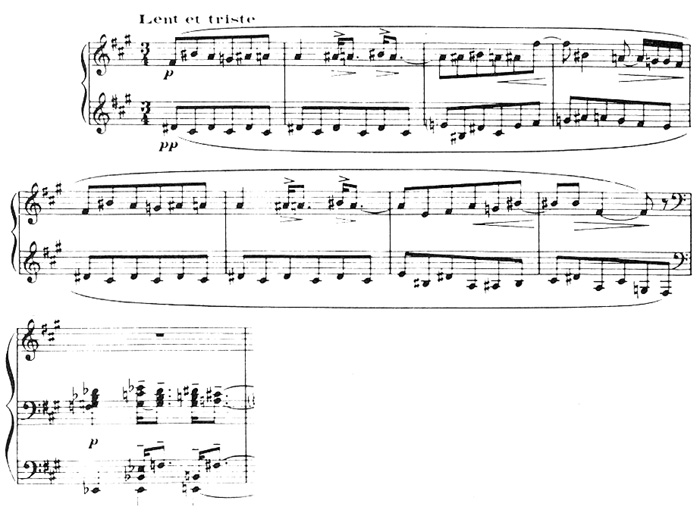 3. Le nombre léger – “The light number” is a short moto perpetuo in a binary form, with the second appearance of the theme presented in the dominant and treated as a canon in the coda. The static canons are colouristic rather than structural anticipating the important use of mensural canons found in Messiaen’s later music. This Prelude is based again on the second mode of limited transposition, like the first Prelude, with the same colour: orange veined with violet.

4. Instants défunts – “Defunct Instants” has a fragmentary structure expressed by two distinct musical idea in alternation. Each “instant” is a musical period with a different rhythm so that the piece has a polirhythmic structure. This Prelude is based on the seventh mode of limited transposition which expresses a dark mood in the following colours: velvet grey with reflections of mauve and green.

5. Les sons impalpables du Rêve – “The impalpable sounds of dreams” is again a symmetrical rondo form plus a coda where the asymmetry introduced by the expansion and contraction capture the listener’s interest. This Prelude illustrates how modes can be used variedly. It opens with a polymodal passage consisting of a pedal-group of chords on the right hand in the third mode, and the main homophonic theme on the left hand in the second mode. The next section is based partly in the second mode and partly in a different mode, not of limited transposition. The part, which introduces again the polymodal section, is based on contrary movements of chords in the sixth mode. The middle section is in the seventh mode and, here, the harmonic intervals come closer and create a dissonant sound. The colours of the Prelude are basically orange blue in the obstinate on the left hand and a violet purple in chordal cascades on the right hand, treated in brass timbre.

6. Cloches d’angoisse et larmes d’adieu – “Bells of anguish and tears of farewell”, as the previous Prelude, anticipates future developments. It is an example of Messiaen’s “development-exposition” form. A sense of intensification, which is typical of classical development sections, is achieved in the first section by simple contracted repetitions of the same material in successively higher keys. The piece begins with an “additive” rhythm (unusual for this period) on repeated G, suggesting the tolling of a bell. The beginning of this Prelude involves the use of resonance homophony in the sixth mode above the principal homophony in the second mode, the whole of which in turn adds resonance to the chords in the lower and middle register of the piano. Unlike Ravel’s La Vallée des cloches (the last piece of Miroirs, 1905) where the sound of the bells is rendered by a simple succession of fourth and fifth descending harmonic intervals, Messiaen uses a succession of full chords, a “waterfall of chords” played in the upper register of the piano, which he calls “resonance effect”. All the high harmonics of the bells resolve into luminous vibrations. Messiaen in particular, describes the colour of the last three notes, the adieu, as purple, orange and violet.

7. Plainte calme – “Calm lamentation” is in a simple ternary form and its first section is repeated with “open” and “closed” cadences. Messiaen uses the second mode in its third transposition evoking dark colours of velvet grey with reflections of mauve and green.

8. Un reflet dans le vent – “A reflection in the wind” is a clear reminiscence of Debussy with its occasional touch of surrealism, but Messiaen, differently from the Impressionists, uses a definite formal structure: A – B(development) – A’ + coda. The light storm that opens and closes the piece, based on the third mode in its fourth transposition, evokes orange veined with green colours, dappled with a few black spots. The central development is more luminous. The second theme, instead, is very melodic and coated in sinuous arpeggios with an orange blue colour in the first exposition and orange green in the recapitulation.

These excellent notes about Messiaen’s Eight Preludes come from the following source: 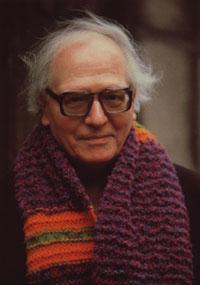 “I give bird-songs to those who dwell in cities and have never heard them, make rhythms for those who know only military marches or jazz, and paint colors for those who see none.” —Olivier Messiaen

KeyNotes is a group of teachers and performers who are dedicated to the piano and other keyboard instruments. When any of them finds a particularly interesting piece or concept, they enjoy sharing it through an article or two.