Film creator Vida Vega takes a highly creative and fun-filled look at multilingualism in Europe in this one-minute award-winning film. We’re very grateful that she gave us permission to use this little gem in our film scoring practice!

Be sure and turn down the sound before viewing.  It might be fun to give each bird a different musical note/idea/instrument and see what wonderful cacophony might emerge!

5 birds of different nationalities and one fat cat learn that it’s not how you say it but what you say that counts. An animation commissioned by the European Commission as part of the “languages through lenses” competition to promote multilingualism in Europe.

“As someone who grew up in a mixed family speaking 3 languages I felt that although different cultures and languages can be difficult to adjust to at times, I really wanted to respond to the brief by portraying the positive, fun side of language. My starting point were the brilliant words different languages use to describe the sounds animals make, and the observation that although each language seems to have a different way of describing birdsong, a cat will pretty much always miaow. The EU motto “united in diversity” seems particularly apt – though we are all different, ultimately we are all saying the same thing.”

“My name is Vida Vega, I am a half Italian/half Chilean mongrel born and bred in London. I am a freelance 2d animator currently making my way into the world via inky “traditional” drawings and characterful humour. I am represented as a director by Tandem in London and have recently worked as a director, character designer and animator on amongst other things, my first commercial for Tempo tissues. I am also lucky enough to have been nominated for the British Animation Awards for both my graduation film and my first commissioned short “mi’au, myau”, and just this March won the Best 2d commercial BAA for Tempo.” 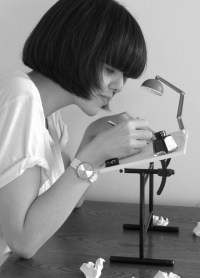