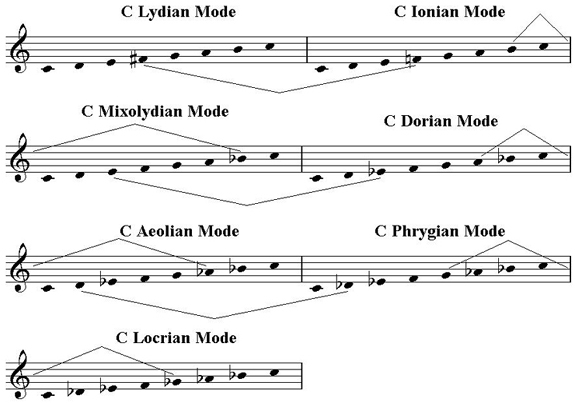 In a previous article entitled Seven Modes, Three Primary Colors, we learned to identify modes as one of three “primary colors”.  We classified these colors as “major-ish”, “minor-ish” or “diminished-ish”.  The “majorish” modes are Ionian, Lydian and Mixolydian.  Those modes which are “minor-ish” include Aeolian, Dorian, and Phrygian.  The strange and wonderful Locrian mode is “diminished-ish”.  In the grouping pictured at the top of the page, all the “majorish” modes come first, followed by the “minor-ish” modes, followed by Locrian mode.

In that same article, we listened to several short folk songs that demonstrated some of the seven modes.  Now we’ll deepen our knowledge by listening to three 20th century composers who used modes in their pieces.

The first two compositions are predominantly in a particular mode, and the third goes through many modes.  Can you identify the mode for each piece?  How did the composer’s choice of mode(s) add to the character and “color” of the piece?   How do the modes allow a composer to work within a tonal framework without being limited by tonality?

For each piece below, identify the mode(s), then just listen to the entire piece – first for pleasure, then for discovery!

O Come O Come Emmanuel – 12th century hymn, often sung in plainchant.  This hymn is one of the musical sources of the Respighi piece which follows it.

Ottorino Respighi (1879 – 1936)  Adoration of the Magi, from Three Botticelli Pictures.  Notice how he uses many modes, and combines them with chromaticism to achieve a harmonic language that is both old and new.