The “Haydn” Quartets by Wolfgang Amadeus Mozart are a set of six string quartets published in 1785 in Vienna, dedicated to the composer Joseph Haydn. 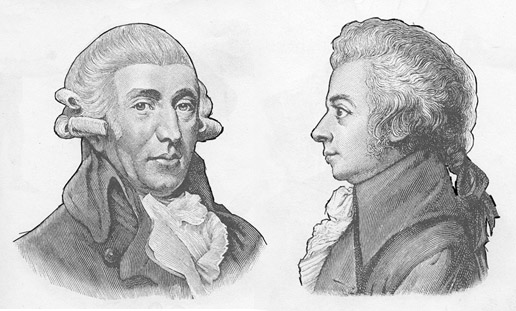 Haydn was already a famous composer when Mozart was still a child.   “Papa Haydn” was known as the father of the string quartet, and was revered by the musical elite of his time.  His six string quartets of Opus 20 (1772), called the “Sun” Quartets,  may have been the inspiration for the six string quartets K. 168 – 173  that the 17-year-old Mozart wrote during a 1773 visit to Vienna.

When the grand old composer and young prodigy finally met, they became friends, colleagues and great fans of each other’s talent and works.

Haydn freely praised Mozart, without jealousy, to his friends. For instance, he wrote to Franz Rott,

If only I could impress Mozart’s inimitable works on the soul of every friend of music, and the souls of high personages in particular, as deeply, with the same musical understanding and with the same deep feeling, as I understand and feel them, the nations would vie with each other to possess such a jewel.

Before God and as an honest man I tell you that your son is the greatest composer known to me either in person or by name; he has taste, and, furthermore, the most profound knowledge of composition.

The young Mozart dedicated the six string quartets to his friend and mentor, in a time where most pieces of music were dedicated to aristocratic patrons.

To my dear friend Haydn,

A father who had resolved to send his children out into the great world took it to be his duty to confide them to the protection and guidance of a very celebrated Man, especially when the latter by good fortune was at the same time his best Friend. Here they are then, O great Man and dearest Friend, these six children of mine. They are, it is true, the fruit of a long and laborious endeavor, yet the hope inspired in me by several Friends that it may be at least partly compensated encourages me, and I flatter myself that this offspring will serve to afford me solace one day. You, yourself, dearest friend, told me of your satisfaction with them during your last Visit to this Capital. It is this indulgence above all which urges me to commend them to you and encourages me to hope that they will not seem to you altogether unworthy of your favour. May it therefore please you to receive them kindly and to be their Father, Guide and Friend! From this moment I resign to you all my rights in them, begging you however to look indulgently upon the defects which the partiality of a Father’s eye may have concealed from me, and in spite of them to continue in your generous Friendship for him who so greatly values it, in expectation of which I am, with all of my Heart, my dearest Friend, your most Sincere Friend,

The slow movement in F minor is a triple-meter canon on the familiar theme also used in the finale of Haydn’s Op. 20 No. 5 quartet in the same key, and that Mozart would much later use in the Kyrie from his Requiem. The finale is a fugue which is also similar to one of the finales of Op. 20, this time the A major quartet (No. 6).

The opening movement is a theme and variations with a theme that resembles the variation theme used in Haydn’s Quartet Op. 9, No. 5 in B flat. The second phrase of the slow movement contains the opening theme of Haydn’s Op. 9 No. 4 in D minor.

The beginning of the minuet is the same as the minuet from Haydn’s Op. 9 No. 4 in D minor.
The finale is a fugue whose subject begins with a descending chromatic fourth.