Musical Words as a thematic tool 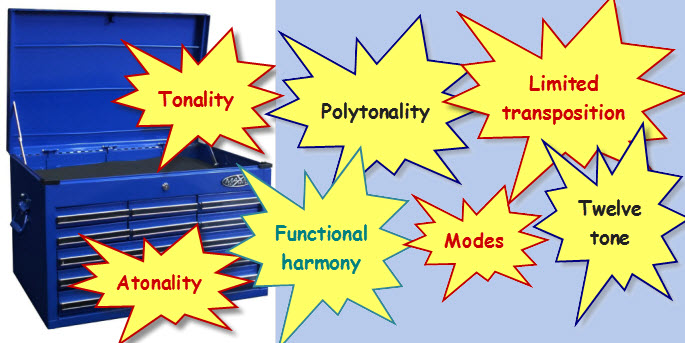 Open the toolbox of a 21st-century composer and you might find a myriad of styles, methods, and musical systems.  We’ve inherited the best of the past while developing exciting new trends.  These days composers have the freedom to use old or new, borrowed or blue, sweetly consonant or blatantly dissonant.  The sky’s the limit for the creative imagination.

In our Harmonia studio, several composition students have been exploring two “new” tools this year.  The first of these tools we call “Musical Words”.  Our melodic lines are created by select words which are then translated into notes of the chromatic scale.  Using words or letters of the alphabet to determine musical notes is not exactly new!

Bach did it.  Shostakovich did it.  Alban Berg and Josquin des Prez, Ravel and Messiaen, Elliot Carter and Edward Elgar – and countless other composers – all created themes or musical ideas from letters or words.  Most of them used names, as a sort of musical signature or homage.

This practice can be traced back almost 500 years.  One of Josquin’s masses, which was dedicated to his employer and patron ‘Hercules Dux Ferrarie’, includes the Duke’s name and title as part of the music.   This first known “musical name dropping” used the old solfege syllables to determine notes.  Today our first solfege syllable is “do”, but back then it was “ut”.  In Josquin’s day, the notes in solfege were ut-re-mi-fa-sol-la.  He took the vowels of “Hercules Dux Ferrarie” – e, u, e, u, e, a, i, e and matched those to the vowels of solfege -re, ut, re, ut, re, fa, mi, re.  Using “C” as ut, the notes spelling the Duke’s name became D-C-D-C-D-F-E-D.  This melodic line became the cantus firmus of his mass.  This practice was called “soggetto cavato”, a shortened version of the phrase  “soggetto cavato dalle vocali di queste parole”, which literally means a musical subject ‘carved out of the vowels from these words’.

Soggetto cavato was a very limited form of translating words to musical notes, since it only used the vowels.   Later composers branched out a bit with their “musical signatures”.

In German musical notation, B flat is called “B” and B natural is known as “H”.  Johann Sebastian Bach used these spellings to create his famous “B-A-C-H” motif.  The BACH motif was used by Bach himself in many of his compositions, and has also been used by many composers since Bach’s time as a way to honor the great Baroque composer.

Another composer who used the German notation to create his musical signature was Dmitri Shostakovich (Dmitri Schostakowitsch).

Here is the first movement of the Shostakovich String Quartet No. 8.  Notice the repeated use of the “DSCH” theme and its imitation:

Soggetto cavato and German notation are both limited in their spelling of complete words, so later composers and theorists developed new ways to translate names or words into musical notes.  One of these is the French style translation:

In this translation table, the letters A, H, O and V all represent some form of the note “A”, either natural, sharp or flat.  The letters B, I, P and W represent some form of “B”, and so on. Presumably the composer selects the accidental for each note, choosing from naturals, sharps and flats.  This method would allow either diatonic or chromatic themes, depending on the composer’s preference.

In 1909 Jules Ecorcheville, a French editor, asked for musical tributes to Hadyn for his centenary celebrations.  He proposed the theme “B – A – D – D – G” to represent “HAYDN”, substituting a “B” instead of “A” for the first letter “H” to avoid too much repetition of notes.  Many composers responded to this challenge.

The most notable piece from this compositional adventure was Maurice Ravel’s “Menuet sur le nom d’Haydn” (Minuet on the name of Haydn).  Note the upside down and backwards musical spellings of the Haydn theme, in addition to the delightful B-A-D-D-G theme which begins the piece and threads its way through various sections.

Since many of our Harmonia students are experimenting with styles and tools that go beyond tonality and functional harmony, we adopted a modified version of the French translation table:

This version of the table is almost guaranteed to create a chromatic, rather than diatonic musical theme.  Using this table, the name of our studio, “Harmonia”, has a musical motif of Ab-A-D#-Fb-A#-Gb-Bb-A.  If we write this motif enharmonically, favoring flats, it would be Ab-A-Eb-E-Bb-Gb-Bb-A.  What an interesting chromatic motif or theme!

One of our fifth grade students was so taken by the Musical Words idea, that she mapped the names of all her school friends into musical themes.  “I have great friends”, she reported back.  “They all sound good in music translation!”  This same student vows that when she grows up and has children, she will give them names that sound good in music.

Once we determined the method for creating our motifs, or themes, or melodies, we turned our attention to harmony.   We studied a great deal of 20th century music and came away with a method we really liked.