Their contrasting pictures, their rhythmic names, and their achingly different dates begin to weave a story …

Two sisters. One soft and dreamy, poetic and very young. The other, photographed at a much older age, seems to be made of sterner stuff. We hardly remember Nadia as a young girl; all we know of Lili is the delicate young prodigy. Lili was ill and fragile all her brief life; she died before her 25th birthday. Nadia was a huge musical force and an extremely influential teacher who taught for over seven decades, primarily from the family flat in Paris. She was a tireless conductor and teacher who worked almost until her death at age 92.

The Professor and His Princess

The story of Lili and Nadia begins with their larger-than-life parents. Their father Ernest, a distinguished violin professor, came from a long line of important musicians. He won the prestigious Prix de Rome in composition in his younger days and later taught voice and violin at the Paris Conservatoire. Their mother, Raissa Myshetskaya, was a Russian princess of formidable education who married her singing teacher. At the time of their marriage in 1877, Ernest was 62 and his young princess was 20.

Nadia was born ten years after the fairy tale wedding. When Lili was born six years later, their 78 year old father asked Nadia to promise that she would care for her little sister all her life.

Both daughters were talented prodigies. Nadia entered the Conservatoire at age 10, later studied composition with Widor and Faure. Lili tagged along and accompanied her older sister to class, the four year old sitting in on such classes as counterpoint and fixed-do solfege. The two girls continued their studies and their composing throughout their growing up years, with Nadia providing constant support to her younger sister. Nadia had her hopes pinned on winning the Prix de Rome, as her father had done years before. Even though no woman had ever won, she entered time and time again, sometimes challenging the judges with her choice of genre. Several times it was whispered that her entry was far and away the best, but she never won. After four attempts she finally won Second Prize in 1908, but the First Prize eluded her. She and Lili were both stunningly talented, but they were women in an age that barely recognized the accomplishments of their gender.

Then came the wonderful year of 1913. Lili entered her cantata Faust et Hélène into the Prix de Rome competition. The judges gave her piece First Prize and declared it “beyond compare”. To this day, it still stands out as one of the best cantatas in the history of the Rome prize. News of this astonishing woman and this historic event quickly spread through Europe and across the Atlantic and was greeted by joyous cheers from the early feminists, particularly in the United States.

Here is Lili’s cantata “Faust et Hélène”, which created history by winning First Prize in the Prix de Rome.  Lili was 19 years old when she wrote this cantata in 4 weeks, as dictated by the rules of the Prix.

Perhaps it was the promise she had given her father; perhaps it was her sister’s accomplishments and great talent, perhaps it was the fact that teaching was her deepest calling. Whatever the combination of reasons, Nadia began to give more and more time to teaching, less and less to composing. Lili was among her first students, and Nadia was an important mentor and guide for her sister’s blossoming career.

Then the war began. From the joyous celebrations of 1913, we plunge to the cruel and bitter realities of a war-torn Europe. Lili had been ill since the age of 12, and was extremely fragile. Now, as her health worsened, it was difficult to get even the much-needed ice to keep her temperature down. Nadia nursed her, helped her finish her compositions, was constant companion and helper. In spite of the loving support and efforts of family and friends, Lili died in 1918.

Nadia was greatly affected by Lili’s death. From 1919 on, she never composed again. Instead, she became one of the most well-known teachers of all time. The composer Ned Rorem described Boulanger as “the most influential teacher since Socrates.” She taught a very large number of students from Europe, Australia, and Canada, as well as over 600 American musicians. However, neither she nor Annette Dieudonné, her life-long friend and assistant, kept records of the students who studied with her. It is, moreover, virtually impossible to determine the nature and extent of many musicians’ private study with Boulanger, ranging from prolonged and intensive tuition to brief, informal advice. 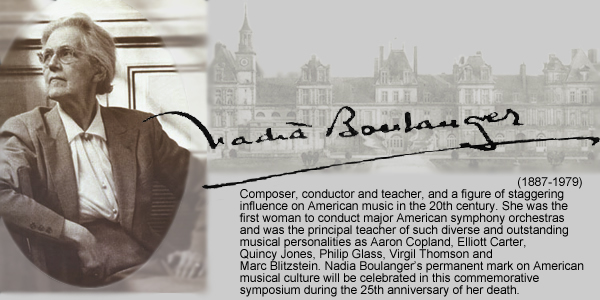 Two sisters … one creating music landscapes of unsurpassable beauty, one shaping the future of 20th and 21st century Western music. Their story is legendary; their legacy is a treasure trove.

A Legacy of Music

The exquisite Nocturne for violin and piano is a wonderful example of Lili’s work, written when she was still a teenager.