PETER AND THE WOLF

Prokofiev’s Peter and the Wolf  never fails to delight us!   This introduction to the orchestra was originally intended for children, but everyone is entranced by his beloved masterpiece.

We may be five years old, acting out each character and giggling through growls.  Perhaps we’re ten and just beginning to compose for different instruments — yes, the oboe really does sound like a duck, the flute like a bird!  We may be young parents sharing a joyous memory from our childhood days, as we discover a new version of this perennial favorite for our own children.  Maybe we’re all grown up and teaching music ourselves now, and want to make sure that our young students have a solid grounding in orchestral music from the classical repertoire.   What better way to introduce young musicians to the orchestra than through an exciting story! 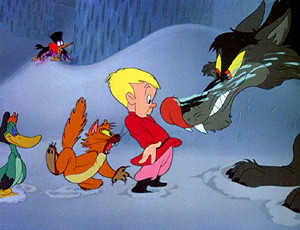 Whoever we are, no matter what our age or level of sophistication and training, we’re sure to shiver at the sight of the wolf, and smile with relief when we hear the first strains of Peter’s theme as he comes to the rescue.   We’ll still be smiling when the troop of intrepid hunters marches through the end of the story in triumph.

Sergei Prokofiev wrote the original story and composed the music in a few short weeks of creative energy in 1936, in response to a commission for a piece for a Russian children’s theater.  The music was intended to instill a love of music in even the youngest children.  Since it was first heard live in Moscow, the piece has been recorded by scores of orchestras, a myriad of different narrators have given life to the characters, and the text has been translated into a host of languages.  Peter and the Wolf has become an important part of our musical heritage. 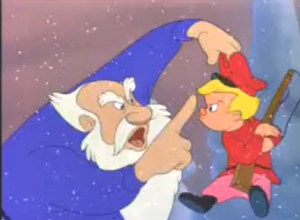 In performance, a narrator tells the story of Peter and his adventures with The Wolf, and the orchestra accompanies and enhances the tale.  Each character in the story has its own instrument, and its own musical theme, which is also called a “leitmotif”.

Prokofiev uses all four orchestral families:  woodwinds, brass, percussion and strings.   You can see the characters and their instruments in the picture below: 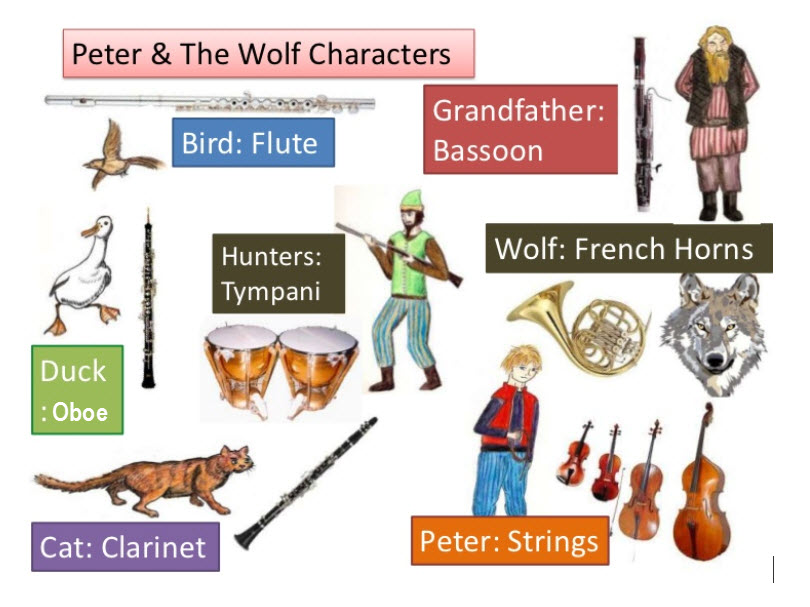 Here are two wonderful versions of Prokofiev’s famous tale. The first is narrated by Boris Karloff with drawings by Lina Hassoun.

In this version, we get to watch the orchestra and see the actual instruments as the story unfolds. The Vancouver Symphony Orchestra’s music director Bramwell Tovey does double duty as conductor and narrator in this delightfully entertaining performance. It’s the final work on a program that introduces listeners young and old to the various instruments and sections of the orchestra.

After you’ve listened, learned about the instruments and the story, and you feel you know Peter and his friends very well, you might want to take the Peter and the Wolf listening quiz.