Today we are going to learn about the “Petrouchka Chord”, created by the great Russian composer Igor Stravinsky.

First, listen to Petrouchka and read about this wonderful ballet:
Petrouchka – Igor Stravinsky

Now, let’s look at one of the most important themes of this piece of music:

The above arpeggiated chord is the “Petrouchka chord”.

How is this chord built?  What is the top chord?  The bottom chord?

Why does it sound so dissonant, when it is just two major chords?

What is dissonance – when and where do composers use it?

What is the interval between C and F#?

How has dissonance and particularly the use of the tritone changed from Bach’s time to our time?

What does this chord or arpeggio mean everytime it occurs in the ballet?

What does this chord tell us about Petrouchka?

Here is the chord again, this time played as a tremolo: 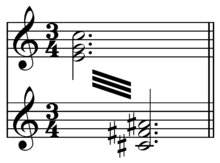 Draw a picture of how this chord makes you feel.

What other pieces can you think of that use the tritone as a prominent musical idea?

How can a composer use a tritone in his or her music today?

There are several other distinct chords used in music, such as the “Tristan chord”.  Can you create your own “signature” chord?   How will you use this in your own compositions?  What would you like for it to mean?

Not only is this chord based on a tritone, it is also bitonal, or polytonal.  What is bitonality?  What is polytonality?

Can you think of other pieces that use polytonality?

If the two chords creating the polytonal chord were C maj and E maj instead of C and F#, how would that change the character of the new polytonal chord? 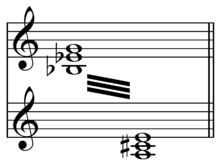