Mix together a captivating 18th century German lyric poem and a hefty helping of enchanting music written by a French composer at the end of the 19th century.  Add a delightful 20th century Walt Disney character from America and sprinkle with wide-eyed young children from all over the world.  Here you have a recipe for multi-media magic, and better yet, magic gone awry!

Goethe’s poem Der Zauberlehrling, written in 1797, is narrated by the apprentice himself, and begins when his master has gone away:

What a wonderful German word for “sorcerer” – Hexenmeister!   It sounds like something from Harry Potter.  Indeed, our sorcerer and his apprentice would feel right at home at Hogwarts!   The English translation for the first verse sets the scene:

That old sorcerer has vanished
And for once has gone away!
Spirits called by him, now banished,
My commands shall soon obey.
Every step and saying
That he used, I know.
And with sprites obeying
My arts I will show.

You can feel the rising excitement!  The young apprentice has been watching his master weave spells to command the spirits, and now the master has stepped out for a while.  The stone chambers ring with silence and anticipation.  While the master is gone, the chores have to be done.  One chore is fetching water by pail – slow and tedious work, and exceedingly boring for one who is learning magic!

“Aha!” thinks the apprentice.  “I’ll cast a spell on that old broom in the corner and get it to fetch the water!”  He puts on the sorcerer’s tall, blue, star-studded hat and casts the spell. 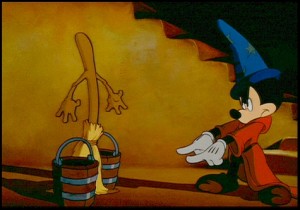 The spell works!  The broom springs to life and starts carrying buckets of water to fill the stone basins.  Back and forth it travels over the cold, ancient floors.  Bucket after bucket, pail after pail.   The basins are full!   But the broom doesn’t stop.  He keeps carrying water, sloshing it on the floor, covering the old stone.   The apprentice becomes frantic.   He remembered the spell to bring the broom to life, but he can’t remember the spell to stop it!

He shouts at the broom:

Brood of hell, you’re not a mortal!
Shall the entire house go under?
Over threshold over portal
Streams of water rush and thunder.
Broom accurst and mean,
Who will have his will,
Stick that you have been,
Once again stand still!

It’s no use.  The broom is under a powerful spell, and just keeps carrying the water and pouring it onto the cavern floors.  The water is rising, rising, almost up to the bottom of the steps!   What can the desperate apprentice do?

Can I never, Broom, appease you?
I will seize you,
Hold and whack you,
And your ancient wood
I’ll sever,
With a whetted axe I’ll crack you.

Wham!  Bam!  The axe splits the wood, and for a moment it seems that the nightmare might be over.   But no.   The broom becomes two brooms, each with its own bucket.

Woe betide me!
Both halves scurry
In a hurry.
Rise like towers
There beside me.
Help me, help, eternal powers!

Another chop, and still another broom comes to life!  Whack!  Crack!  Every splinter of wood becomes a monstrous new broom relentlessly marching from well to basin, pouring water as they go.  Now instead of one bewitched broom, the apprentice has a small army of water-sloshing spirits! 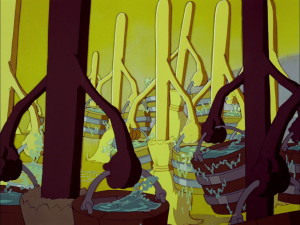 Aiyahh!   Is there no end to this ferocious frenzy of fetching water?   The apprentice is beside himself with fear and trembling.   What can he do?  Just before the entire cavern is engulfed with water, who should appear but the Hexenmeister himself!!   He rips his hat from the apprentice’s head, glaring at him with eyes like burning coals. 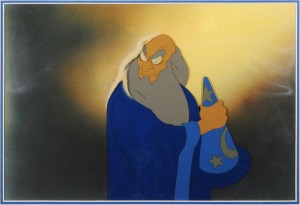 The mighty Hexenmeister calls to the original broom and all the splintered-off brooms, who quickly recognize the sound of their master’s voice, and scurry to obey him:

“To the lonely
Corner, broom!
Hear your doom.
As a spirit
When he wills it, your master only
Calls you, then ’tis time to hear it.”

The spell is broken.  One lone broom lies quietly on the floor, lifeless and harmless, and all the other brooms disappear.  The apprentice bows his head, mumbling apologies to his teacher.   He has learned his lesson.  Never again will he attempt to take magic into his own hands.   Not until he himself becomes a full-fledged sorcerer, that is! 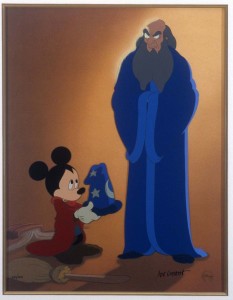 Now that you know the entire story, and have learned some of the original verses from Goethe, let’s listen to the music that was inspired by this poem.  Paul Dukas (pronounced Due-kass) wrote the music in 1896-97, almost exactly one hundred years after Goethe wrote the poem.  Dukas set Goethe’s poetic story to music in his piece entitled L’apprenti sorcier (The Sorcerer’s Apprentice).  This symphonic poem is subtitled Scherzo after a ballad by Goethe.  It has become the most popular of all works written by Dukas.  The music was one of the featured pieces in the Walt Disney 1940 animated film Fantasia, which led to the piece becoming widely known to audiences outside the classical concert hall.

Here is a link to the original Disney setting from 1940:

Here is another version of The Sorcerer’s Apprentice, this time for two pianos!