Here’s an easy way to remember the order of flats and sharps:

You may want to memorize the order of the sharps and flats with catchy sentences or phrases.  Learning these phrases also helps in learning intervals.

FLATS:   BEADGCF   Battle Ends And Down Goes Charlie’s Father (4ths)
Notice that the two lists are palindromes – one is the other spelled backwards!

As you probably already know, 4ths and 5ths are inversions of each other.  We can alternate 4ths and 5ths when building key signatures, so that we don’t have to use ledger lines!
Order of flats

Here are all the sharps and flats, in order, in four clefs: 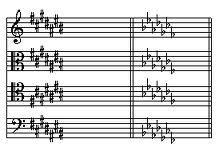