Young Person's Guide to the Orchestra 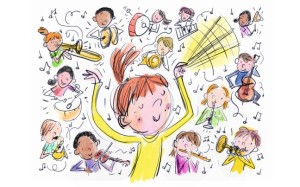 In 1946 the British composer Benjamin Britten was commissioned to write a piece for an educational documentary film entitled The Instruments of the Orchestra.   The piece he wrote for this film has become one of the most popular and well-loved pieces in the classical music repertoire.

The Young Person’s Guide to the Orchestra, Op. 34 is a great addition to an illustrious list of famous pieces for music education.  Saint-Saens’ The Carnival of the Animals and Prokofiev’s Peter and the Wolf are two of the other pieces most often used to introduce young children to the creative world of classical music.

The subtitle of the piece is Variations and Fugue on a Theme of Purcell.  As this subtitle implies, the primary structure of the piece is a set of variations on a theme written many centuries earlier by another great British composer.

In March of 2011, 101 musicians from 33 countries chosen on YouTube to make up the YouTube Symphony Orchestra 2011 converged on Sydney for a week long festival of musical collaboration and participation.

The culmination of the week long festival, a Grand Finale concert was streamed live on YouTube from Sydney Opera House. Watch the multimedia extravaganza featuring extraordinary projections on the interior Concert Hall and the exterior sails of the iconic Sydney Opera House.   Britten’s “Young Person’s Guide to the Orchestra” was one of the selections of the Grand Finale concert.  The multi-media in this video is so exciting!

BONUS:  For those of you studying plagiarism, sources and inspiration:  Composers often use each other’s music to create new music.  Not only is this acceptable, it’s a very useful practice.  Here is the music written by Henry Purcell in 1695, which led to Britten’s variations:

Here’s another great presentation, with illustrations of each instrument and family.